The Truth Behind Slate Roofs 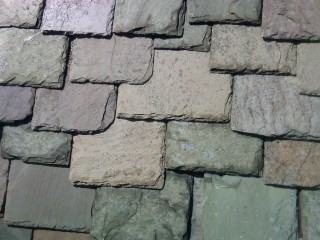 With the introduction of asphalt to the roofing industry in the early 20th century, slate roofs have become rare.  While more attractive, slate is also much more expensive.  Generally speaking, slate cost around ten times more than asphalt.  Most homeowners who want the look of slate cannot justify the price.  They have had no other option except to settle with a temporary roof, such as asphalt.

See below for a list of pros and cons of slate rock roofing:

The Pros of Slate Roofing

Appearance — Homeowners are drawn to slate roofs because of their appearance.  It is largely considered one of the most attractive roofing styles.  Slate roofs are available in a varying number of colors, sizes. and thicknesses.

Longevity — Compared to modern asphalt roofs which typically need replaced every 10-15 years, slate roofs are expected to last over a century.

The Cons of Slate Roofing

Heavy Weight — A slate roof is extremely heavy.  Typically slate can weigh between 800-1500 lbs per square.  This can become a major problem for aging structures.

Fragility —  Even though slate is very durable, it can break when stepped on.  It takes proper training and experience before walking on a slate roof.  Replacing a broken slate tile is a complicated process.  It is almost impossible to find an exact match.

Flashings — One often overlooked disadvantage of slate is flashing.  Metal flashings tend to wear out long before the slate material.  Repairs can be difficult and require the service of roofing professionals.

For years there were only been two options for homeowners looking for the beauty and durability of a slate roof: shell out the tens of thousands of dollars on a slate roof, or settle for asphalt.  That was until now.  Classic Metal Roofing Systems, based in Ohio, manufactures a roofing system which offers all the benefits of a slate roof without any of the problems.  The Slate Rock Oxford profile mimics the look of slate, maintains the durability, is completely maintenance free, and will not burn.  It is lightweight and will not become brittle.  Best of all, Slate Rock Oxford costs far less than true slate.

Over the next couple weeks, we will be posting pictures of a project we are working on outside Columbus Ohio.  This homeowner loves the look of their slate roof, but is worried about the weight on their aging home.  Schroer & Sons installation crews will dismantle their slate roof and replace it with our Slate Rock Oxford from Classic Metal Roofing.  Be sure to check back periodically as we update this post with more pictures.

Get to Know Us